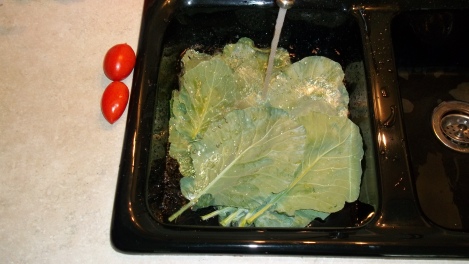 I don’t like to face the end of gardening, (and picking and eating) but some things still go on for a little while.  I have Lima beans forming in huge amounts and don’t know that they are usually this late.  The other beans are pretty much done, but Limas look like they’re just getting rolling. And the vines are almost 1/2″ think where they come out of the ground, and probably 12′ long.   (Limas must have been the beans that Jack and the Beanstalk was all about.) King of the Garden heirlooms, oh yea, more of them next year for sure. Tomatoes are winding down too, getting smaller and will soon be done.

I had stopped picking collards cos I had eaten and frozen so many, and the plants have had a chance to form some new, more tender and sweeter leaves.  I picked a bunch of them and will cook them today, then saute them with tomatoes and Rotel (tomatoes and green chilies, oh I love Rotel) tomorrow.  They taste different in the fall, and the worm problem hasn’t been so bad since I discovered and  used Bt over the summer, weekly and after each hard rain.  The only one I found in this bunch was bigger and I could see the little……….well, just worm, lol.

I have lots of things put by for winter.  Lots of dried beans for soup.  Chili peppers drying for lots of kinds of recipes.  Collards and tomato sauce frozen.

How did your garden grow?