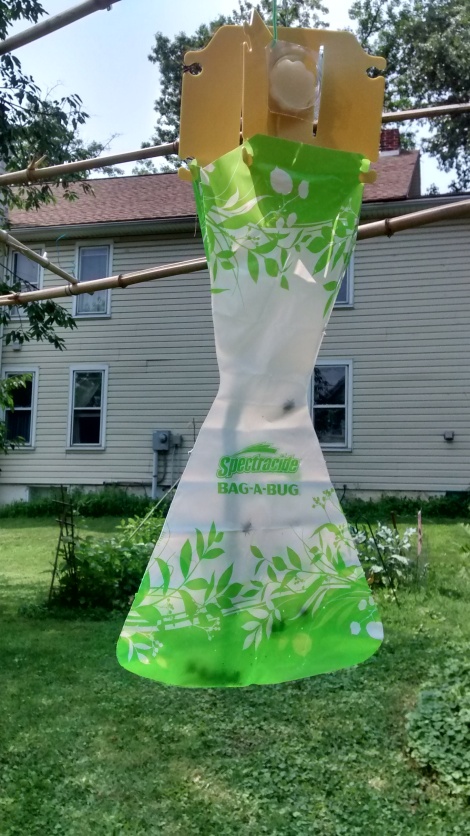 Japanese beetles are a garden pest that can wreak havoc on several things:  roses, and, as I discovered 2 years ago, green bean leaves.  Then last year I discovered this really neat thing that does work exactly the way it’s supposed to.

The little disc that attracts the beetles has no poison, and that’s one thing that made me want to try this.  I don’t like to use poisons in the yard or garden cos it’s just all wrong.  This thing has the pheromones of the female beetle, and it must be good strong stuff.  One was flying around it just after I hung it up.  Now it’s been hanging there almost 2 hours and you can see there are beetles in it already.

It’s called Bag a Bug, made by Spectracide, and costs $5.  I get them at Lowe’s but I’d think any good garden place would have them. They fly into the blades looking for that good smelling female beetle, slip on the blades and go right down into the bag and can’t get out.  They even include a piece of wire to hang it up.  The kit comes with an extra bag and that’s great. The bag with a bunch of them in does start to smell pretty rank after about 2 weeks, especially if rain gets in it, which doesn’t hurt anything. Once you put up the second bag and it lasts about 2 more weeks, their season is over and your green beans, or whatever else they tear to pieces, have been saved.

It’s so good when a company advertises a product and it works just like it should. It’s an easy and inexpensive solution to a bad garden problem.

4 responses to “Some things work just like they’re supposed to!”