Mmmm, stuff from the garden is always the best.  I have a few jalapenos left, the regular green ones that have now turned red. Eliza’s purple ones are flowering and making new peppers again.  I told my dentist about those and he stopped what he was doing to say:  What?  Purple?  I never heard of those. I showed him a picture on my phone. OK, doc, we’ll get you some seeds.  She is letting a couple of them go dry on the plants for us next year and some for him and maybe for somebody else.  (Saving seeds, heirloom plants, ok, off the soap box, lol.) He doesn’t grow much except sweet and hot peppers, and the man must be brave, cos he eats ghosts and scorpion peppers, supposedly the hottest there are.  So, in exchange for us giving him some purple jalapenos, he’s giving me some ghosts.  I passed on having any of the scorpions, cos I don’t think any of us here want any of the very hottest ones.  Exchanging seeds, that’s how heirloom plants get to be kept going, to quote my friend Sam, who sent me the Hopi orange Limas.  Good way to put that!

Then there’s some spinach that’s really just getting started after having been planted about 3 weeks ago.  Some of that will be good for supper sauteed with a little garlic.

The jalapenos are good stuffed with a combination of cream cheese, shredded sharp cheese, a little garlic powder and one pinch of powdered cumin.  I half and clean the jalapenos, carefully, giving high regard to the capsaicin oil in them that gives them the heat.  Washing hands right after cleaning them will remove most of the oil, and some people even wear gloves.  Most of all, keep hands away from your eyes for a while even after having washed them. What’s good in your mouth and stomach, as much as hot pepper eaters like them, is still not good for mucous membranes.

I like to cook them for about 4 minutes in boiling water to soften them up, then stuff them and put them in the toaster oven at 375 for maybe 20 minutes.  Mmmm.  So many people don’t like or can’t take hot peppers due to stomach issues, so you either love ’em or hate ’em, and I love ’em.

Some of the garden blessings will go on for a little while yet. 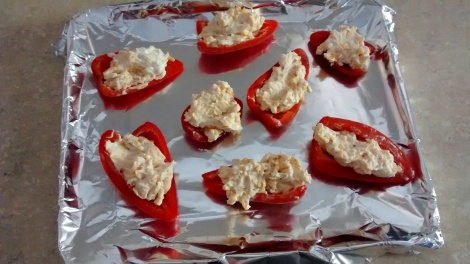 Well I’ve taken 2 pictures of the finished ones and both got blurry for whatever reason, but you get the idea.  And I’m hungry………..

2 responses to “Goodies from the end of the garden”