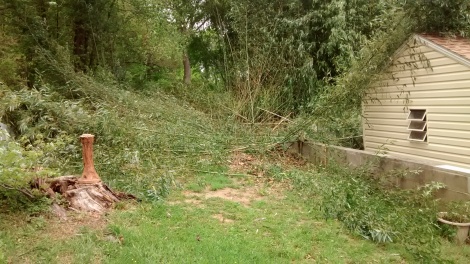 In a previous post, I talked about the hundreds of birds coming to roost in my bamboo each night. https://sarasinart.net/2017/04/18/big-bird-problem/  The guano that that many birds produce can cause serious health problems once it lays on the ground a while, and then can become airborne.  I had a lot of answers to my research about what to do, cos these birds needed to go.

The Department of Agriculture was willing to come and spray the bamboo with a non-harmful grape scented liquid that birds don’t like the taste of, but will not harm them. That would have been an expensive proposition, and was not guaranteed. Once it washes off, determined birds might come to roost again.

Cut down the bamboo was most people’s first answer.  I wasn’t willing to do that, but after all my research, it seemed necessary to cut down a big part of it.  A smaller mass would be a less attractive roost.  Logically, less birds would be able to fit in.

So a couple days ago, I had my tree service come and cut down the most dense parts. That was also an expensive proposition, but the only one guaranteed to produce some results.

That night we had terrible storms, and the reduced unit of bamboo swayed in the strong winds so much that it would have been hard for birds to hang on in there.  They must have roosted in more stable trees that didn’t blow around so much.

Another good hint I was given in my quest for birds to be gone was physical harassment. That harassment would need to go on for as many nights as it takes to make them decide they don’t like it here any more, lol.  The harassment should be staged each night around dusk, as they’re coming in for the night.  Noise, laser lights, water being shot into the bamboo.  Or, a paint ball gun!

So, as an adult old(er) woman, I went and bought a paintball gun.  Last night, some birds were coming in for the night. Not as many, and there seemed to be some territorial stuff going on, like this is my space, not yours, cos some birds flew down into the bamboo and left quickly.  I saw that happening as I was getting my new toy ready.  Then, I declared war!  There was a lot of squawking and wing sounds as they came into different areas and I shot into those areas.

As some came and I sent them on their way, I saw some flying to the woods behind the house. (They can roost there cos they’ll be spread out over a bigger area, good.)  So, then some birds coming, begin shooting, getting closer to dark, less coming, more shooting, almost dark, only a few coming, more shooting…..and finally a few more shots with no wing rustling and no more birds flying out.

It was full darkness and there were no birds in the bamboo. This is how the military describes winning the battle, but not the war…..yet.  It’s all good, cos I’m determined, and I bought a big box of paint balls.