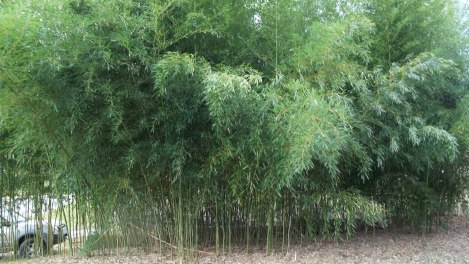 For several weeks, several hundred black birds have been flying in every night to roost in my bamboo.  Either starlings, or my son says grackles.  Whatever, too many birds, anyway. They swarm in black swarms and settle in all the trees around here, then a few at a time fly into the bamboo.

I like to go out and pester them near dark.  If you go over there and talk, or shake some bamboo, there is a lot of fluttering of wings and some chatter and maybe a hundred fly out and come back in right away.  So at first it was kinda cute.  But they haven’t stopped coming; they’re there every night.  They scare the neighbors as they walk up the alley beside the house.

And now, the whole area is starting to smell like a bird cage that should have been cleaned, oh maybe last week sometime.  That can’t be healthy to have around.

So, I’ve gone on a search for a way to get rid of the birds.  I don’t want them dead for sure, I just want them out of here. No poison can be used cos there are lots of other animals around.  And nobody wants hundreds of dead birds to deal with either, no.

Searched online first.  There is a machine that makes sounds like birds being killed and has distress calls. The machine costs about $200 and it says it’s loud enough to disturb near by neighbors. And reading the reviews, some say it works, other say it doesn’t.  $200 experiment, no thanks.

Several sites suggested putting netting “over the trees” where the birds are.  So for this large, very tall, grove of bamboo, I’d need an airplane or helicopter to drop the biggest net you could imagine down on top of the bamboo. Uhhh, no.

So then I started calling local pest control and exterminators.  Got some answers.

Cut down the bamboo. Uhh, no.

Birds?  We can get then out of a building, but not out of trees.

We can put sharp spikes in the trees as a deterrent.  Did you hear me say this is bamboo?  Lots of it.

So, finally one big exterminator company said they can get birds out of trees and bamboo etc.  The guy will come to talk to me about the details.  The man on the phone said the technician would be able to come at 7 PM on Saturday, would that be ok?  It’s a little odd to me, but yes, then he can actually see the swarms of the birds coming in, good timing!

Maybe they’ll find a way to get the birds to go to the woods behind the house.  They’d be spread out over a bigger area, and not cause anybody any problems.  No more bird cage smell in the back yard, I hope.