I went to the greenhouse early in the season to buy herbs.  I saw 4 “cute little spaghetti squash” plants, and decided to bring them home too.  I would plant them in my 3 Sisters area.  https://sarasinart.net/2016/06/13/three-sisters-2/  They sat there for a couple weeks, making roots and getting adjusted, and then they took off. 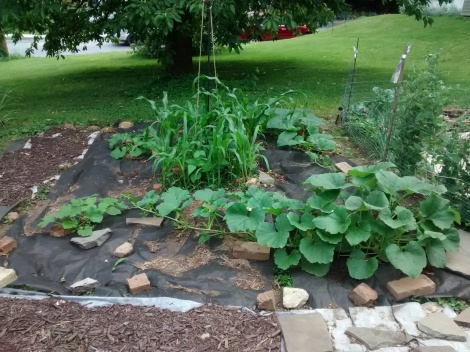 I’m learning about squash this year and had never grown any before.  The other types of squash that I’m growing are all bush types, big bushes to be sure, but not the kinds of plants that go roaming around. Spaghetti squash, on the other hand, roam, and roam, and climb the fence, and now there are spaghetti squash all over the 3 Sisters area plus in the paths I intended to be able to walk in.  I keep putting them back into the area where they’re supposed to be; long vines, 20′ long, with more flowers and more squash.

I’ll eat some and so will my daughter in law, tho Dylan won’t eat squash. And since these are winter squash and will have a hard skin when they’re ripe, we can store some for months in the house.  And, I’m pretty sure we’ll have some to share!

The whole garden is just amazing after  a rough spring to get started in.  In 3 Sisters, the blue Hopi corn plants are in tassel and the bean plants  are ready to bloom. 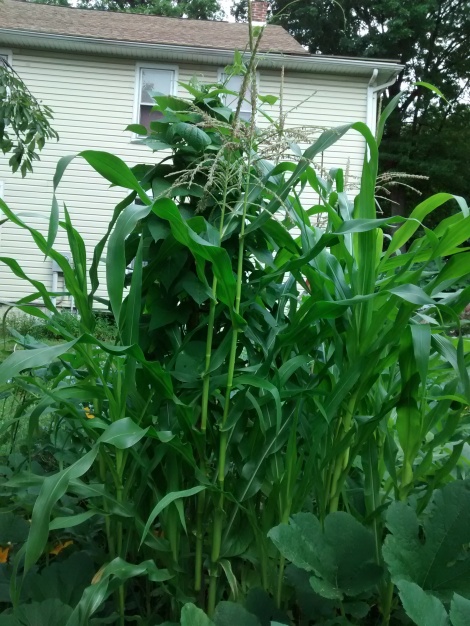 There are lots of tomatoes coming along to eat and put away for winter, like these Romas. And there will be some of them to share too. 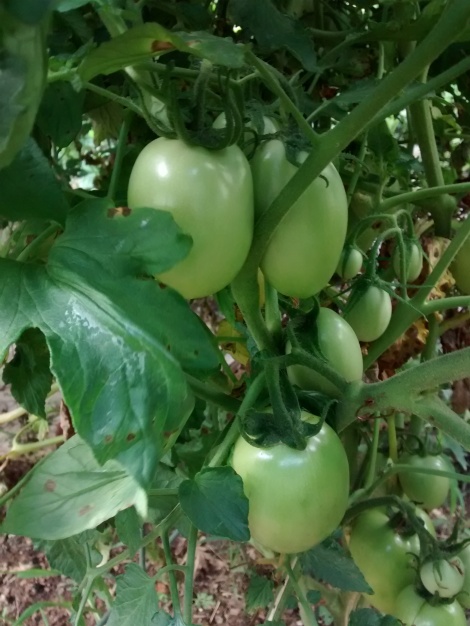 Beans are starting to make their way across the pergola in all directions: green beans, King of the Garden Limas and purple Thai yard longs.

Other beans don’t  go climbing like that but are producing well:  a few kidney plants and some black turtle beans.  All those will be picked dry and saved for winter soups.

There’s a new thing growing this year I had never heard of before, and learned about on a FB gardener’s page.  These are  Mexican gherkins called cucamelons, but they should be called cute-amelons, cos they are so cute.  Each one is only less than 1″ long when ripe, taste sort of like a cucumber with a small taste of lime, and you eat the skin, which is not thick and adds to the taste.

Here are the vines growing.  The vines are thin and delicate, and will get about 3′ tall.

And from the back of their fence, you can see the little melons.  Good in salads, or cut in half and pickled in a refrigerator pickle recipe. But a guy on the FB page says they don’t hold up well to being canned.

So, the fenced in area of the garden and the 3 Sisters area was a flat piece of land, with nothing growing on it, and now…………

8 responses to “Things are growing on around here!”