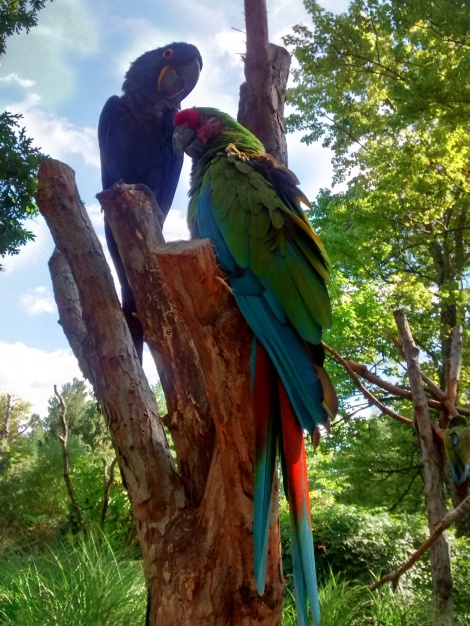 I spent a wonderful day at a place my son and daughter in law love, but I had never been there.  Catoctin Wildlife Preserve and Zoo http://cwpzoo.com/  is located near Thurmont Md, about an hour from us.  Zoo is a word that some people don’t like, cos, like me, they remember years ago when distressed looking animals were kept in small cages with concrete floors and treated very badly. Those zoo animals of years ago didn’t have good lives; didn’t get good food, veterinary care, or enough space to live as their species should have been able to live. They were on display as spectacles for our enjoyment, with little regard for the fact that they had lives of their own, and many were suffering and unhappy.  Not the case at Catoctin!

Catoctin has a great approach to the way they treat their animals. There is very little concrete, most of it forming ponds for animals that need to get into water.  Their food is of good quality and there is enough of it. Veterinary care is there whenever any animal has an issue. All the animals have sufficient, natural space to be able to climb or run or fly, or whatever their lives require to be happy and healthy. Most of all, you can see the care and dedication of all the staff when they interact with their animals:  they know them, they are friends with them, and do all they can to make sure each one is very well taken care of. They have a long list of credentials to prove how their wildlife preserve and zoo are operated. Many of their animals came to them from situations where the places they were before could no longer care for them properly and give them good lives.

So, we bought bags of little pellets that can be fed to many kinds of the animals and started off to look around. The place is huge, and in the mountains, where trees give shade to the enclosures and everything looks like a habitat that animals would want to live in.

Soon we went on a big enclosed wagon pulled by a semi truck, on a safari! Bison, emus, fallow deer, water buffalo and zebras were all around us in different areas.  We made 4 stops in there and at 3 of them, we could feed the animals, many right out of our hands.  We couldn’t feed the zebras by hand since they tend to get a little more excited and might also bite.  But having a bison eat from your fingers and an emu look up over the side of the wagon at you, and seeing zebras come running cos they know the vehicle will have staff that throw food out to them, that was all so much fun. We saw the little donkeys that have the crosses on their backs too, nubian burrows.  Several zebras went right up to the guy who was driving the truck to get  their heads patted, since he knows them so well. 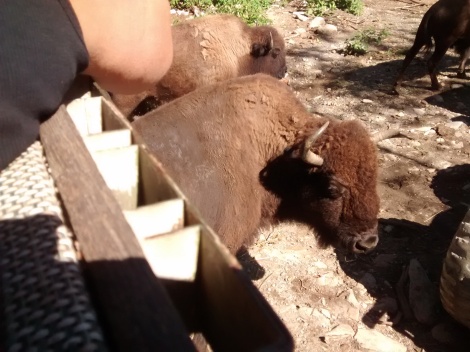 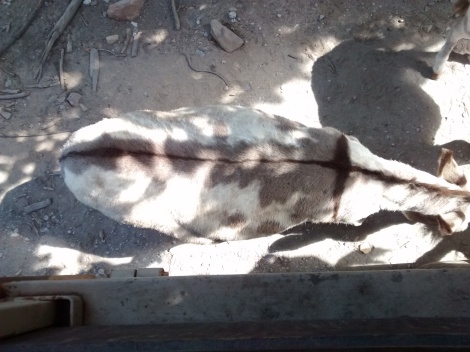 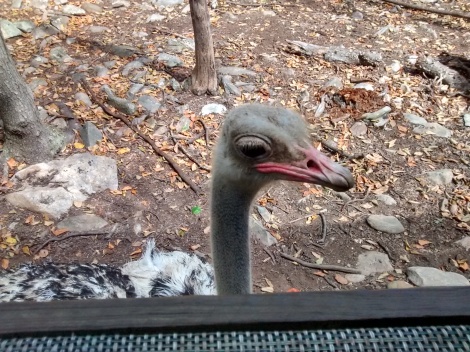 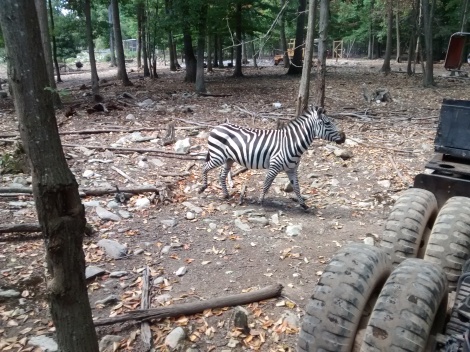 It’s great when you can have fun while learning things on an adventure like this.  There were a lot of good learning experiences for me but two stand out especially. My son, who has been there many times, pointed out a pile of animal waste near the center of an area where we could pet and feed alpacas, fallow deer and some sheep.  That’s an alpaca potty, seriously, it is.  They decide on a communal area to do their business, and none of them have to step in anything unpleasant.   The staff clean it up and put some white powder there to prevent a urine smell.  Who knew that animals could be that well organized together and figure out such a thing.  Alpaca potty, and I have a picture to prove it. There it is, behind this especially attractive fellow. It was nice that the alpacas really weren’t into spitting that day. We had all been spit at before, and once is enough. 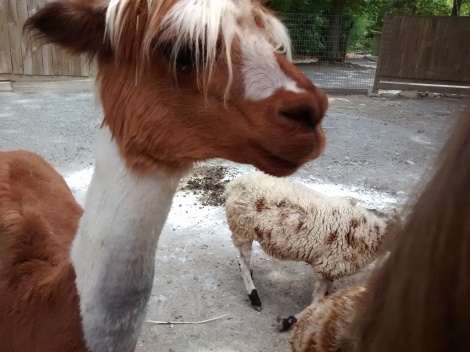 Then the other thing that was amazing for us to learn involved watching other beings learning.  They have a family of macaques; four generations of them having been born there at the zoo.  This particular kind of macaques are the only ones outside of Indonesia, where they come from.

Later in the day, the staff pushed various lengths of fresh bamboo part way into the enclosure where the macaques live.  There were quite a few adults and maybe half a dozen babies in there having a good time  climbing, swinging etc. But when the bamboo came, all the interest was on getting the bamboo pulled inside the enclosure and eating the leaves, wanting to get the juicy stuff inside the bamboo out to eat. But bamboo is tough hard stuff; hard to break apart.

Some pulled on the bamboo to try to get it thru the wire cages, and some realized if they couldn’t bring it all in, they could reach out and pull branches close to the walls and just get the leaves.

Then there was this one, maybe older, maybe smarter, but however he knew what  to do, he was amazing to watch. There is a caged tunnel up high in their enclosure, and it leads to another enclosure beside the one we were all watching them in.  This one had a piece of bamboo up in that tunnel, and he was determined to get the juicy insides of the bamboo. We stood and watched him for a long time, amazed to see him using tools and logical thinking to break the bamboo.  Here’s a picture that’s not so clear, but you can see him in the tunnel with his stick of bamboo. 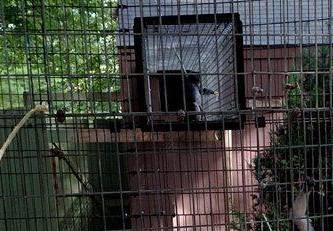 He pushed the bamboo thru the cage mesh and used his body weight to bend it, since he wasn’t strong enough to bend and break it open with his bare hands.  He would push it thru a little further and jump up on it again to bend it again, and then he got some broken up enough to eat the inside stuff.  This smart animal was using a tool, (the mesh fencing), his body weight as another tool, leverage, and logic. Amazing. I do seriously know some people that might not figure that out.

We don’t know how this other guy got his broken up, but this is what they were all aiming for in trying to get the bamboo broken. 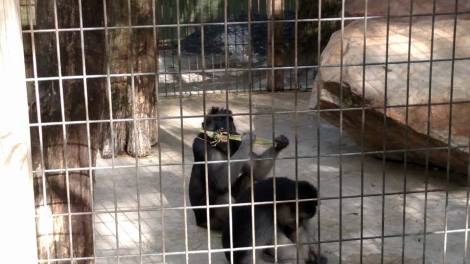 There are things of interest at Catoctin for children of all ages.  For instance, you could ride a camel, and I did. There’s a skill to be learned about  riding on an animal that doesn’t have a flat place to sit on, lol.  The hump is kind of in the way. The plastic frame they put on the camel’s back is to keep you from falling off, sliding right down off the hump. So I held on pretty good, cos up there is a good ways up, and I took a little camel ride.  The camel’s name is Mariah, she is 18 years old and they usually live to be 40. If she was traveling across the desert, she could carry a 750 pound load very comfortably. 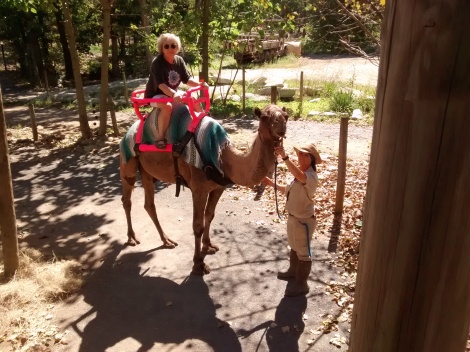 Next spring when we go we can go into a big enclosure with hundreds of parakeets and feed them peanut butter off of sticks.  We missed that by eight days, since the nights have been getting cooler and they had to move those birds inside. We discussed among us what it would be like to try to catch several hundred birds, but the staff there know how, and take good care of all of their animals.

There are so many more kinds of animals there: big cats and alligators and bears, oh my, and buildings with exotic snakes and even meercats, which have to be some of the cutest things alive. There’s a nice gift shop, and a cafe with some sandwiches and drinks and snacks.  You can spend a whole day and have everything you need to walk around and enjoy a great experience. Their website is very helpful with a lot of information. If you’re near here or coming here to visit, you should spend a day at this wonderful place.

8 responses to “Catoctin Wildlife Preserve and Zoo, what a wonderful day”