Spending a week right on the Sinepuxent Bay just across from Assateague Island and then the Atlantic Ocean, we got to see lots of the animals there. I never knew there were fiddler crabs that far north, having only ever seen them before in SC.  But Dylan said he saw some last year on Assateague, and here, on our back  yard bay beach, they were!  We could see some peeking out of their holes sometimes but none ever ran across the sand so we could get a good look at them.

We had MD blue crab traps out off the dock and lots of seaweed would attach itself to the traps.  Eliza found several tiny mussels tangled in the seaweed and once we found this hermit crab.

That was confusing, taking him out of seaweed and out of the water. The hermit crabs they sell on the boardwalk can’t have deep water in their dishes cos they will drown….but this one came out of the bay?  Google is your friend, even while on vacation.  Turns out there are two types of them, some live on land and some in the water.

We had a turtle hang around the dock a lot and came close to the shore a few times. Google again!  It was a diamond back terrapin, maybe 1′ across. 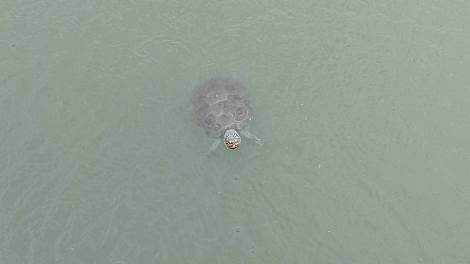 There were the horseshoe crabs mating that I wrote another blog about.  https://sarasinart.net/2017/06/12/what-i-never-knew-about-horse-shoe-crab

We caught some blue crabs, but none big enough to keep. They need to be 5″ point to point and you can never take females.

Then there were other animals too fast to get pictures of. Often we saw loons diving into the water, submersed for a few seconds with no problem, diving for small fish. One pelican sat on the water a while one morning. Plenty of different kinds of seagulls.

One night near dusk Dylan was fishing off the pier and saw a fin above the water.  He thought it was probably a nurse shark, which wouldn’t be unusual there.  Then there were more fins, and we realized we were looking at a pod of dolphins.  They are often seen off the coast of the ocean around that area, and come into the bays as well. (The inlet at the end of the peninsula that OC sits on is right across from the house, and allows them easy access to the bay.) They had moved on down the bay by the time we got out there with phones to take pictures, already too far away. But we got to see some of them jumping out of the water a little as they swam away.

It’s so good to be able to see and interact with creatures we never see at home while we’re at the beach. And at that house right on the bay, the bay is the back yard and we’re in their habitats just by going out the door.