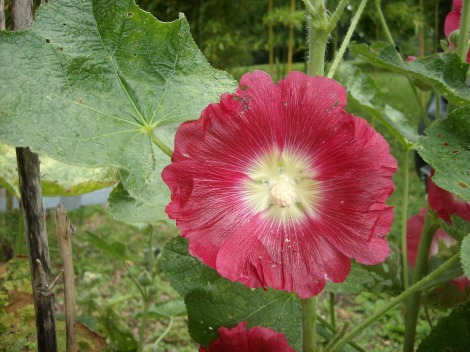 I grow holly hocks.  Most people don’t know what they are any more.  They’re an old-time flower that my grandmother grew.  They come in all shades of pink and red and white.  Some of these old-time plants need to be remembered, and valued for the fact that they’ve been around a long time.

My grandmother taught me many things from her time, and I passed one of those things along today to my neighbor who is 16.  When grandma was a girl, there was no money and no fancy stuff.  Kids played like kids always have, but sometimes they had to find ways to make their own things to play with.  When I was young, my grandmother made me a holly hock doll.  Use a toothpick and choose her clothing colors, and use a bud for her head.

You don’t get to enjoy her long, she wilts pretty quick.  But the plant provided a source of fun and imagination for kids long ago at a time when imagination was about all some kids had.  Times were tough when my grandparents and parents were growing up.  Life was simpler, some of that was good, and some not so good.

Anyway, back to old-time plants. I grow a couple yuccas, also known as century plant.  It’s an old wives’ tale that they only bloom every 100 years, cos many older ones bloom almost every year. It’s a desert plant that really doesn’t belong in PA, but they are usually hardy thru the winters. 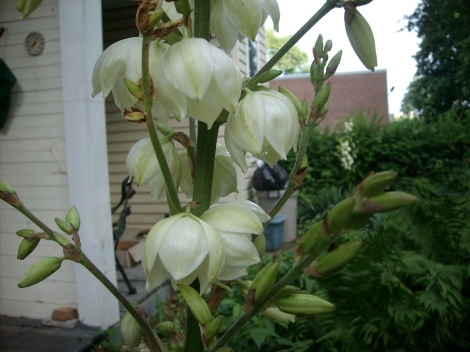 I have an interesting plant that’s called silver leaf by some people, but it is also absinthe.  Absinthe is also a green drink that is hallucinogenic and was used at the beginning of the 20th century by artists, painters and others who then called themselves Bohemians.  Absinthe plants are legal to have, but it is illegal to ferment this plant in most countries, cos the fermented drink (green faerie) can cause serious mental health issues if it is drank very often.

Absinthe is a plant in a family of plants called worm wood.  During the middle ages, many people had parasitic worms in their bodies.  Food was not always good, and there was not as much knowledge about things medical as our science gives us today.  But the people in those times had some science of their own, and the worm wood family was used to make a tonic (unfermented) and was used to drive worms out of a person’s body.

Many houses in the middle ages had dirt floors, and didn’t smell too good, so this plant family and some others were used as what was called strewing herbs.  They would bring handfuls of the aromatic plants into the house and throw them on the floor. When people walked on them, the aromatic essential oils were released into the air, and smelled good.

Absinthe is also the plant that was used to make the original version of the alcoholic drink vermouth.

The science of long ago sometimes gave us things that are useful today.  My neighbor Lizzie grows some old-time plants too.  One of the most interesting is Foxglove.  It is also called Witch’s bells. 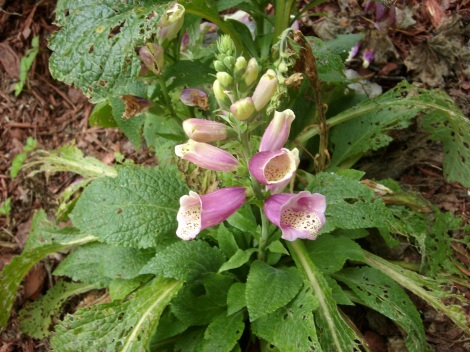 During the middle ages they  knew that people with heart problems sometimes got better from using the juice of the leaves from this plant.  The plant is also known as digitalis, and digitalis is a modern drug that allows bad heart rhythms to be corrected.  Originally when digitalis was used as a medication,  juice from the plant was used, but now they use a synthetic version cos it is more controllable regarding strength.

This plant is stately and will grown to 6′ tall and produce gorgeous flowers and then seeds, but it is can not be ingested!  Any part of the plant will cause heart problems if ingested, and can cause your heart to stop. So look at the beautiful flowers and enjoy the plant, but you should  wash your hands after you even handle the plant.  Butterflies and hummingbirds like foxgloves.

Lizzie grows a couple other interesting things that are old-time grandma-type things too.  One of the prettiest is sweet williams, a Dianthus.

She also grows what my grandmother called wax plants, oh how my grandmother loved her wax plants.  Also called wax begonias.  Grandma had such a green thumb:  she could grow just about anything.  I got her green thumb passed along to me, cos I study plants and how to treat them and let them have the conditions they need to thrive.   Growing things can’t always go the way you want it to, it has to go the plant’s way.  Mother Earth remains in charge!

All these old-time plants are interesting to remember, and bring me back to times of simpler things and simpler times.  Lizzie and her family enjoy simpler things too, and know how to relax in their beautiful yard.

Old time ideas need to be part of my  modern life to slow me  down and remind me of the beauty around me.  Grandma lived in simpler times and would be proud that I remember some of the things she taught me.  Maybe I can cause some people to think of some old-time things that were simple and will still give them pleasure today. The world moves fast, but some of the girls in the modern world still need to know about making holly hock dolls.