She is smart! I kept trying to take her picture, a good picture, face on.  One night it hit me why I couldn’t.  She is smart.  She had figured out that when I hold that thing up in front of my face, the next thing that happens is that BRIGHT light shines in her eyes! Well, she doesn’t like that bright light in her eyes, so she looks away every time the thing goes up in front of my face.  So I managed to get a good one looking only slightly off to the side, so a friend could frame it to hang in my office.  Now she’s the avatar for my FB fan page too: http://www.facebook.com/?ref=home#!/pages/SarasinArt/220821782003?ref=ts   (Those are not her eyes above, cos she would never permit that!  It just adds to the beautiful-black-cat concept.) 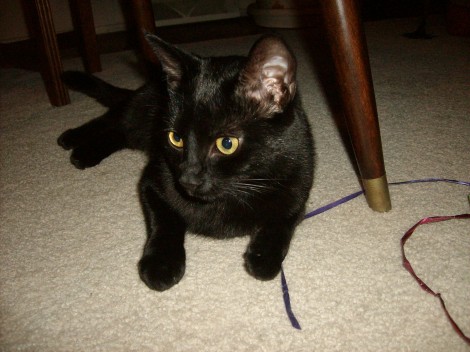 She has front toenails.  I’ve always had a debate with myself and my cats about whether to let the front toenails in.  Most times I have had them removed.  Several times that was when the cat was older and then started tearing up furniture.

I promised MaChatte we wold find a way to leave her toenails in.  When she was a kitten, I talked to my vet about it.  I had bought her a climbing tree, and he said I would have to trim the front nails. Here’s a younger MaChatte on her tree. 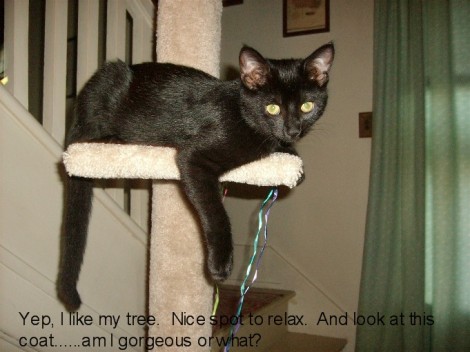 The vet explained fairly graphically what is involved in removing front nails. He also said that if the nails are to be taken out, it should be done before the cat is a year old.  The bones are easier to work with earlier, and the toes would have less trauma.  Our vet now can use a laser to do the surgery, and less trauma and bleeding both are supposed to result.

But I made a committment with this cat not to do that, and she’s over a year just recently, and we’re doing well.  I sit her down on the floor once a week, with her sitting up, and we trim nails with fingernail clippers for humans!  I can tell we’re doing well cos it takes less time now, and she has long since stopped trying to bite me…..I was in favor of that…………plus she is not scratching at any furniture, except her own tree.  So a tree or something like it is a good thing if you’re going to keep a cat’s toenails, and you should start getting them used to having the nails trimmed early.   They’ll need trimmed even when the cat is a kitten, and there’s no sense surprising a larger cat with sharp teeth with a new procedure!

I have a 2nd floor balcony door that she loves to look out of, so I put a storage trunk right in front of it to give her a place to lay and be able to see out easy.  She can look right up into the trees  and see birds and squirrels.  I have a happy cat, and I like that concept. 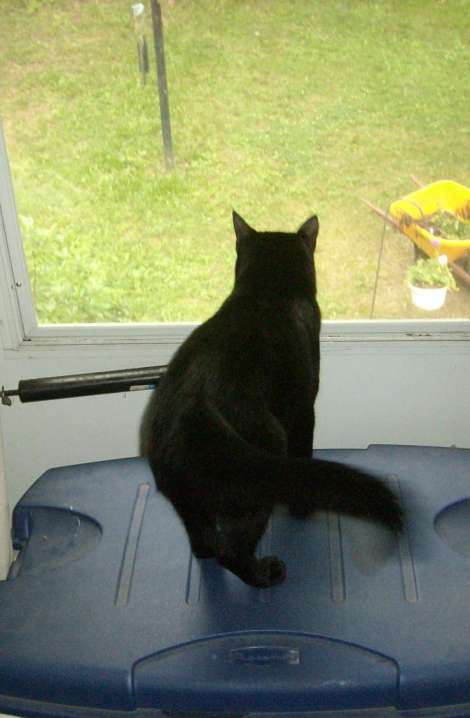 LaChatte was her original name, The Cat.  It quickly changed to MaChatte, My Cat.  But I am her person just as much as she is MaChatte.