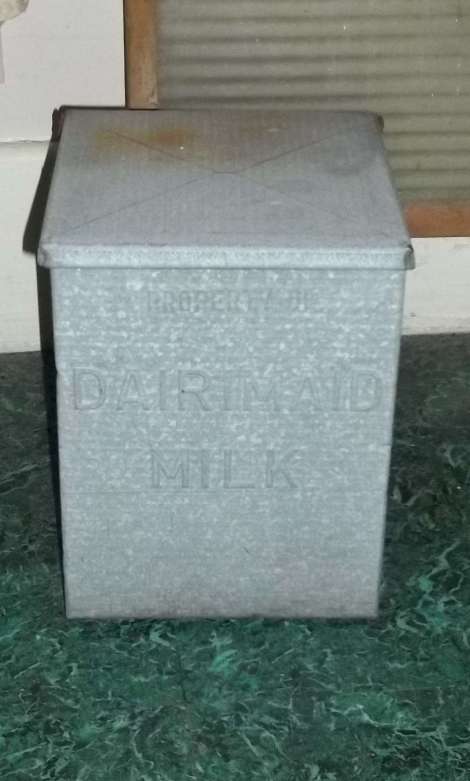 Take a walk down nostalgia lane.  It’s amazing to think back over a lifetime of changes.  Do you know anybody who winds their watch now?  Time (and life) has moved so fast, it’s hard to believe what has happened in 65 years.  And some old habits die hard and some old memories (and even parts of your language) don’t change.

This milk box used to sit on our porch and the milk man delivered milk, butter and sometimes eggs, to your house, several times a week.  If you’re over 50, you might still find yourself occasionally shaking the milk as you get it out of the fridge.  Some part of your brain remembers non-homogenized milk, which had the cream on the top and the milk had to be shaken to mix it.  Nobody under 50 would ever shake the milk now.   More about that here if you really want to go down that memory lane.  https://sarasinart.net/2012/11/09/the-milk-box/

If you’re over 50, your language probably still includes the phrase “car keys.”  You say that, yet you have only one key for your car, and have for many years now, lol.  We oldsters can remember when there was a key for the door and trunk, and one for the ignition.  And there was no clicking the remote from across the parking lot to unlock the door……you stuck the key in the lock to unlock the door.   And you got wet fiddling with that when it was raining.

You came out of that grocery store with paper bags.  And you may have had a butcher in the store cut the kind of meat for you that you needed, wrapping it in white meat paper.  You brought home whole foods, that had none of these preservatives and stuff that we eat today.  You cooked all that from scratch in a kitchen with few  appliances, and  no A/C.  There was no microwave, no electric mixer or blender, no toaster oven, just hand operated tools that could cook up some wonderful meals in the hands of good cooks.

We had television after a while.  There were 13 channels, with a signal brought in by an antenna on your roof, and a motor that turned it around, controlled by a box in your house.   Those antennas weren’t always too sturdy and sometimes you’d hear that somebody’s antenna blew down in a storm. Oh yea, and no remote;  you got up and went across the room to turn the channel.  Before television, we had radio!  We would sit around it and listen to shows, as a family.

Kids went out and played after school in our little town, while dad was at work and mom was making supper, if she was lucky enough to not have to be working.   Our mothers knew we were somewhere in the vicinity, but not exactly where, and there was no problem with that.  Nobody feared their kids being kidnapped and having horrible things done to them.  We rode bikes and skated and  where I lived was near a big woods which we really weren’t supposed to go in, but we did.  The old man who owned the property thought somebody might get hurt going in there, but I can’t remember  of anyone getting hurt.  It was dark and mysterious in there, with  paths thru the woods  that lent themselves to some  interesting games and some scary stories occasionally told by older kids.  But that didn’t scare us off, and the woods was a good place  to be.

Kids used their imagination to find things to do.  Oh we had games; they were called cards and jacks and balls, and dolls and toy cars and trucks, but nothing that plugged in, lol.   Our parents grew gardens and if we were lucky, taught us to grow things too. Mine did, and knowing the things my father taught me about that has served me well all my life.  Grandma taught me things about plants too, and also taught me things from her childhood, like making holly hock dolls. Another trip down memory lane is here:  https://sarasinart.net/2010/06/19/holly-hock-dolls-and-other-old-time-simpler-things/

Moms were busy whether they worked outside the home or not.  The words “automatic washer” have now gone from our language, but before “automatic” washers, there were washers that wrung the clothes out with mechanical wringers.  Then you transferred the clothes to a rinse tub, and later wrung them out again.  You had to turn the buttons inside the clothes or the wringers might break the buttons.  You could get your fingers in the wringers too, if you were’t watching what you were doing.  The clothes were hung on the clothes line to dry, cos there weren’t any dryers.  It was hard to get them dry without freezing sometimes in the winter, and lots of people had clothes lines in their basements for that purpose.  When the clothes were dry, they  had to be ironed, cos there was no permanent press either.

It’s good to look back, and it’s also good, we sure hope, to look forward.

Those are just some odd memories of facts about life years ago. off the top of my head.  Then there are ideas, like morals and judgement and having a sense of personal responsibility.  That’s another blog for another day.

Here’s an old blog to really jog your memory if you’re older, or make you ask your elders some questions if you’re not!  https://sarasinart.net/2012/12/07/do-you-remember-more-nostalgia/