We have a great Fair here. It’s the 58th year, so something about it was always right.  It’s also the largest bi-county Fair in Pennsylvania, since the town sits in two counties, and so does the Fair grounds.  That’s all a little confusing, but we get used to it after a while.  Here’s some interesting history.  http://www.shippensburgfair.com/history/

We’re a small town set in rolling hills with lots of farms, mainly dairy farms and people growing corn and soy beans.  There are competitions at the Fair for farm animals.  Local farmers and also 4H kids enter their animals and that’s a big part of the Fair for a lot of people. It’s more than a contest for the farmers.  Having their animals win awards at a big Fair like this proves that their stock is good, so they can earn more when they sell their animals for meat or breeding.

There is a contest for Fair Queen and Fair Princess.  There is live music several nights during the week.  There is a draft horse competition later in the week, and a horse show Saturday, where courses are set up and the rider and horses compete for time and form while running the courses.

Eliza and I went over Monday morning to enter items in the Home Products Division competitions.  There are many categories: baked goods, canned goods, all sorts of fresh vegetables,  many different handcrafts, fresh flower arrangements and live plants. Small monetary premiums are given to the winners, but the ribbons are the best thing. I’ve won a few for cross stitch years ago and it’s fun to win. Teams of judges look at the entries behind closed doors all day to decide what entries are the best.  And they judge the  baked goods by appearance and taste both!

While we were there we had to go look at some of the animals. I found what I thought to be a really attractive pig.  They were all cute but this one seemed to be smiling.

Eliza made friends with a goat who wanted his head scratched.

Early that first morning you can watch, and hear, the sheep getting sheared.  The sheep always have a lot to say about getting on to the platform that holds their head still while they get sheared.  Waiting to shear them that morning helps to keep them cleaner for their competition, and gives them a nice smooth coat. (They wash the other animals right before they compete.) I always like the ones with the black faces.

Things were quiet that morning cos not much was going on  yet, but I went back today and now things are up and rolling along. Entering the grounds from the bottom of the parking lot, you pass the animal barns and begin to see farm machinery.  Lots of farm machinery, since the Fair is a good place to display things that all the farmers need. 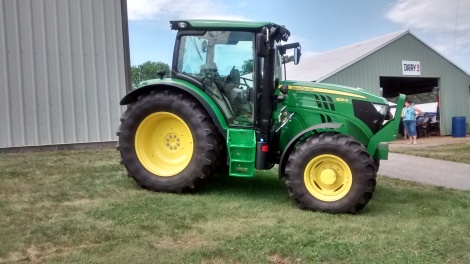 Walking on up thru the Fair, eventually you come to the stuff the kids and younger people all like: rides and games.  Dylan was very good at some of the games when he was a teenager, and used to come home with different things he had won: glasses and dishes and knives. He had instructions not to win any gold fish.

There was a new thing this year that looks like it would be fun for younger people whose bones won’t break.

In between is what I think is the best part of the Fair: the food!  There are all sorts of things: lots of different sandwiches, pizza, soups, pies, drinks, some amazing french fries, all sold by local organizations to help to raise funds for their operations.  There are nice shady places to sit down to eat scattered around.  And if they’re full, I’ve often sat in the grass under the shade of a big tractor!

One could gain weight at the Fair if one went often and ate everything they wanted, lol.  One of my favorite stops  is this ice cream place.  They serve a readily available brand of ice cream, but I swear their raspberry flavor tastes entirely different, just cos I’m eating it at the Fair. 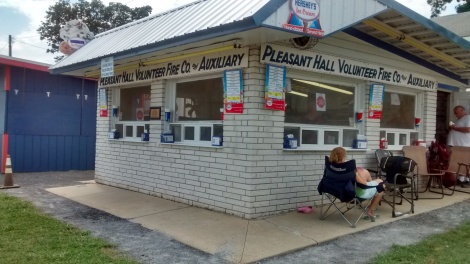 So we have fun, food, games and rides, live music at night and competitions that show a glimpse of peoples’ lives.  And most importantly during all the fun, we have pride in our town and the surrounding area.  The local farmers who work so hard to provide food for us get to show some of the best of what they do.  Good local organizations like volunteer fire companies, scout troops, churches, etc, get to raise money so they can continue doing the good work they do for their community. You get to see people you don’t often see, strolling around or sitting there having something good to eat. Mostly everybody from around here goes to the Fair.

It’s all good. And I make sure I always get at least one dish of that raspberry ice cream, cos no other ice cream will taste that good again…till next year.