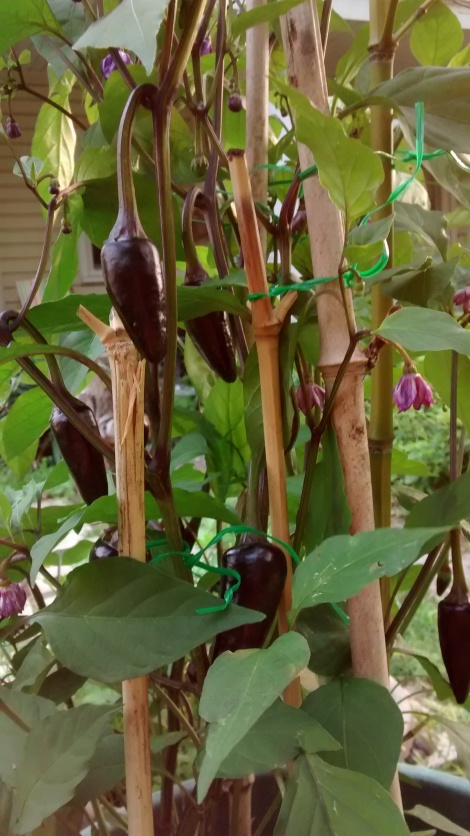 A good Facebook group  I belong to introduced me to a process I’ve never heard of.  Winter is boring for avid (read: addicted!) gardeners, cos we can’t plant anything or grow anything in the zone I live in.  Winter sowing is a process where we can do something in the winter, and it sounds fun. I’ve read a lot about it now and watched several videos with instructions. Here’s what it’s all about.

Some plants do better if they’ve been allowed to go thru their natural cycle of dropping their seeds, which lay on the ground and freeze, and then sprout in the spring, at a time that is natural for them.  Heirloom vegetable seeds is all I plant, and (soap box, sorry)  they are the natural seeds that produce the same plant generation after generation. Hybrids are different than heirlooms in that you will probably get a plant from hybridized seeds but not the same vegetable as the original one was.  GMO seeds usually won’t grow plants that have any vigor, and you won’t get vegetables at all.

So, the seeds are ok to be outside and freeze, cos that’s what they would do if left to their own devices.

In winter sowing, that’s basically what you do: you plant them and let them outside to freeze and go thru whatever your winter gives them. But you plant them in containers, like gallon jugs, with enough dirt to allow them to sprout and begin to grow right in the jug. Then you have seedlings to transplant at the proper time in your growing zone.

You cut around the jugs, leaving one side intact for a hinge, lids off, holes in the bottom for drainage, and put a coffee filter in the bottom of each to allow drainage but keep the ground in. Give them a drink before you close the jugs.  Then tape them shut after sowing the seeds. Good old duct tape. Then  set them out in the weather, preferably raised up off the ground to be sure they can drain. (Check the duct tape now and then to make sure it’s holding.) 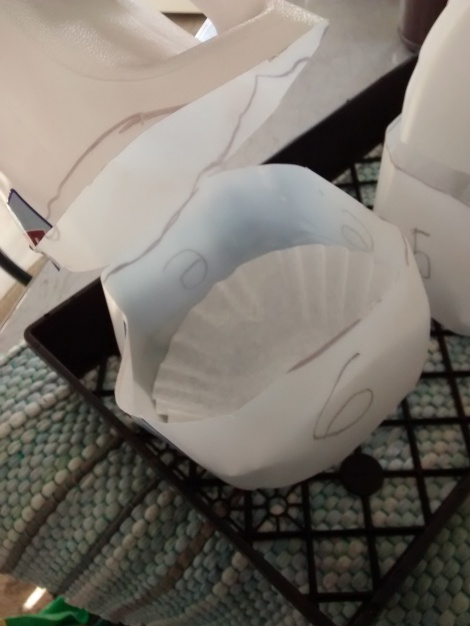 We put our jugs in some plastic frames that we got at the greenhouse last year with annual flowers in. Then we sat the frames up on two bricks to allow drainage. Remember to number  the jugs and write down what seeds each number represents. I’ve read that if you use black markers, the sun will fade the writing, but dark colored crayons are good. 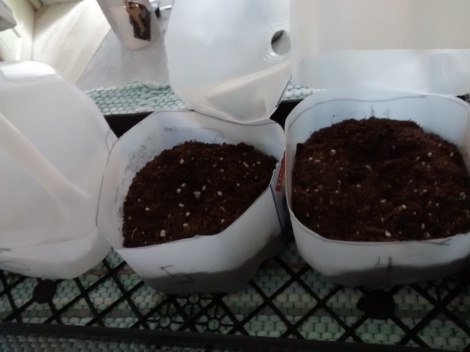 You have to check them sometimes to make sure the ground is moist, but rain and snow going in the top should probably be enough moisture.  Then, once it starts to warm up, you have to check them often to see if some have sprouted. Once they start to sprout, you need to open the jugs (one side intact for a hinge, remember) so they can get sunlight. You can then close them again at night if it will be a little cool.

Once sprouting starts, if you get some really cold nights, you need to bring them into the house or another warm building. With them taped shut, they are cat proof…..MaChatte once chewed up  some collards and cabbages when she got into a pot of seedlings that I thought I could sneak into the kitchen for just that one night. I guess greens are greens to a cat.  Now I keep cat grass growing for her, but I’ll still close the jugs when I bring them in. Fool me once……

You can pick up the frames or whatever you have them in and bring them in without disturbing the little sprouts. Then, when it’s time to plant, carry the whole thing right to the garden and transplant them where they will live and give you a blessed bounty.

See, now avid gardeners have winter activity, lol! (Other than drooling over seed catalogs.) You have to prepare the jugs, sow the seeds, check the moisture, and later watch for sprouts and watch the temps then, and that way you get to feel like you’re really doing something.  People on the group I belong to swear by this method, say it’s an easy way to get your seedlings going, and they get good results from the plants they winter sow. So we’re trying it, with several kinds of tomatoes, and various sweet and hot peppers.

I’ll post again about how it went.  You can do a search and get lots more information, in case you’re also a gardener that wants to have some winter gardening activity. 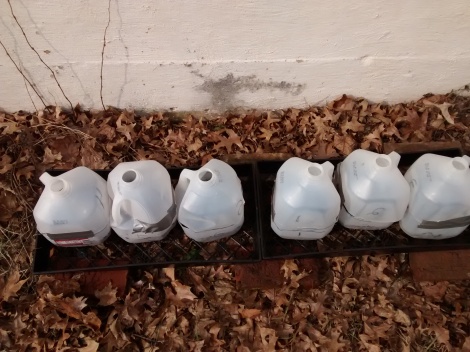