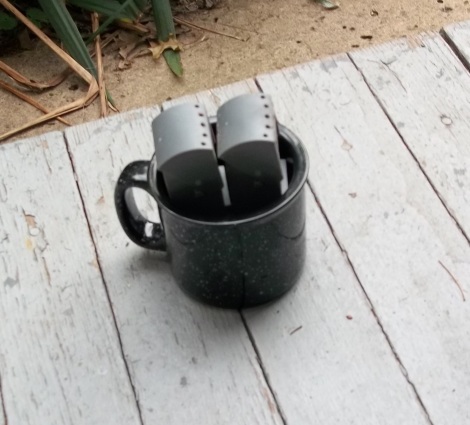 A little mouse smelled something that smelled really good. He had never heard of peanut butter, but he knew a good smell when he found it.  It was coming from a little opening in the end of a little tunnel-thing.  He couldn’t resist, and he went in to see what that smell was.  Bang, a door shut and he was trapped!  Another little mouse came along the same path and also smelled that irresistible smell, and he went in for some too. Bang, he was trapped also.

The first one heard the other one’s door shut and hollered out:  Hey, I’m trapped in here!  I can’t get out!  The other one replied, I’m trapped also!  Some of those humans say they were abducted by aliens; do you think that’s what is happening to us?

For several days now when I take MaChatte out, one or two mice have run from an ivy covered area right outside my back door, right in front of her, and one day she almost caught one.  She wants that to happen, but I sure don’t.  Dead mouse, or hurt one, cat with a disease maybe, or cat injured by the scared mouse.

So, last night I set out two live traps.  (I’m a real softie who doesn’t like to kill anything.)  The mice are scared but had some good peanut butter to eat overnight.  There are air holes in the traps so they can breathe.  So here they are this morning, packed up to move to another area of town, where there is lots of room to run, places to hide and live, no cat right there to possibly catch them, and no possibility of getting into my basement for the winter somehow.  If I’d take them up to the woods, they would just come back; mice are smart.  They don’t need to die, they just need to get away from right outside my back door.

So much for alien abduction, or,  to them, I guess this is what this is!