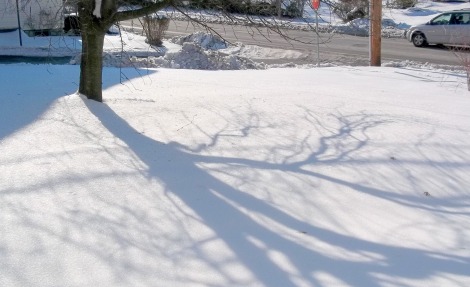 Some say it’s just an ordinary Pa winter.  It probably is, but it’s the worst one I can remember for a long time, like since I was a kid.  It just keeps coming and coming.  The ice storm we had several days ago left thousands of people across this area without power, and some are not still restored several days later.  Snow had fallen and was still on tree limbs, and then ice, a lot more other places than we got here, so we were lucky and thankful.

We just have lots of snow and ice and inconvenience, and 1-3″ more coming today.  This shot is my side yard covered with snow and ice on top of it, ice so thick that I don’t sink in when I walk on it.  So that’s a skating rink and I’m not a skater, old(er)  and with some health issues.  For the first time in almost 13 years here I walked around that expanse instead of over it to take my garbage cans down to the street.  The alley and sidewalk is cleared, and this is a long space of ice like glass.

We had that polar vortex just several weeks ago, the longest time of brutal cold I can remember.  And the first time in maybe 20 years that we had to think about dripping water overnights to prevent pipes freezing.  And lots of people did have frozen pipes anyway.  MaChatte thought it was fun: she never got to play in dripping water for very long before.

Maybe I’m just getting too old to appreciate  winter!