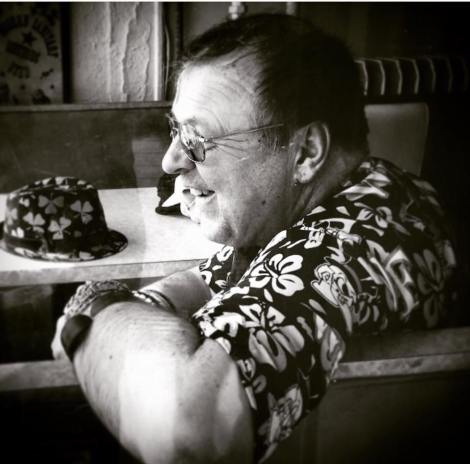 There is a man in our small community who mostly everybody knows, but hardly anybody knew his last name till a few days ago. His name is  Ralph, 57 years old, and he is developmentally challenged.  He walks the streets, constantly, smiling and talking to everybody, and waving at cars as they go past.

He is the town’s biggest Pittsburgh Steeler’s fan, as evidenced by the outfits he wears, and the fact that he usually carries a large black and gold umbrella.  Ralph walks around and sometimes is not too careful of traffic, but locals all know him and watch out for him. Some of us have talked about the fear that somebody from out of town might hit him, not expecting him to walk out suddenly at times.  That was the worst we thought could happen to Ralph.

But.  Over the weekend, some young man beat Ralph up. They say he’s ok now but has a lot of black and blue bruises on his face.  He told the police that the man did that because he doesn’t like the Steelers.  Whether that was the reason the man had for beating him or that was Ralph’s interpretation, nonetheless someone beat him up pretty badly.  Someone chose to prey upon and physically injure a man who shows nothing but kindness to other people and probably wouldn’t, or couldn’t, physically defend himself.  Nobody knows of Ralph ever doing any harm to another person, and he might not have known the concept of fighting this awful man back.

A Facebook page about our  local info suddenly began to  be filled with posts about the beating of Ralph, the outrage of people for this senseless act, support for him and interest in helping in some way. Stories began to be told about kindnesses that Ralph shows to  others, like always being cheerful, and bringing birthday cards to the church dinners he attends, and Christmas cards to people who have been nice to him. Suddenly, lots of people who knew Ralph independent of each other came together to say:  we need to help Ralph.

A local man named Michael Collins started a gofundme http://www.gofundme.com/tq4m5n5nk and the results were amazing. Michael also took these pictures of Ralph and gave me permission to show them.

Michael, as well as a couple other people on the FB page, said he would buy his own ticket and take Ralph to a game.  Some of  them said they’re not even Steeler’s fans, but obviously they’re fans of Ralph. People chimed in that they know people at the stadium or people tied in with the team, and might be able to get something special happening for Ralph once he gets there.  Lots of people posted on the FB page about how Ralph has made them smile or made them happy in various ways.  All he wants to do is live his life, be nice to people, have people be nice to him, and root for his football team.

So, because one very ignorant man decided to prey upon this guy who never hurt a soul, a community has circled their wagons around Ralph!  There is no doubt that Ralph is going to be going to a Steeler’s game, and who knows what other good things might happen for him while he’s there.    Here’s another of Michael’s pictures. It does a person’s heart good and restores some  hope for humanity to see something like this happening.

ADDED:  Several tv stations around south central Pa have now picked up Ralph’s story, and are airing shots on their news shows about him.

Also add this note from Michael from  the FB page, several days after all this came to light:

Thank you to everyone who donated to help me take Ralph to see the Steelers, the response has been incredible, a lot of people went out of the way to send emails, make calls, spread the word and chip in money, this whole thing has been amazing, Senator Alloway is involved and the Steelers too! Most likely Ralphie will be standing on the sideline during the pregame, meet all the players and possibly even be on the fifty yard line for the whole game. We are just waiting for all the details to get worked out. Thank you everyone. Ralph is pretty excited that this is happening and I’m sure it’s something he will never forget!

And on 5/6, this happened on USA Today, Steeler’s Wire.  Ralph will be famous all over.