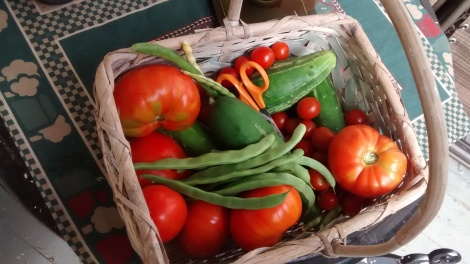 It was a bounty this morning.  It was a little dicey picking the little sugar baby tomatoes which are right next to the black eyed peas, with the yellow jackets that are always around them.  But we all found a way to get along.

Half a dozen cucumbers, half a dozen  nice big red tomatoes, just a few green beans that Eliza will use in a dish to take to work for lunch,  along with her bowl of beautiful yellow plum and purple tomatoes she was out there picking.  (That’s not a snake in her bowl; keep reading, lol.)

I’m thoroughly enjoying  the garden, being retired and having time to enjoy it, and also having these blessings of the earth all do so well and give us plenty of good stuff for ourselves and enough to share.

I’ll blanche and skin the big tomatoes and freeze them till I have enough to make a big pot of tomato sauce for good stuff in the winter.  (Onion, garlic, a little green pepper and some herbs go in that.) Dylan and Eliza like that too,  so I’ll make sure it’s a big pot. I also picked just a few dried kidney beans to cure and store, and the first chili to turn red, which I’ll use in my supper.

The Hopi orange Lima beans are one thing that constantly amaze me.  I’ve never seen a bean plant produce as many blooms as these do; so many that they remind me of grapes on a vine. Looking in here you can see clusters of flowers, and I know we’re going to have a lot of beans from this.  To save as seed, put in soups in the winter,  and eat plenty of fresh, which I love.

The Hopi seeds came from a friend who says they taste better than green Limas. When they’re fresh, they’re still green, but when you let them dry in the pods they look like this.  Thanks, Sam! 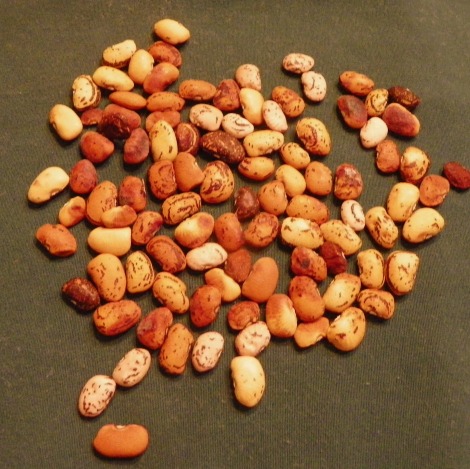 Still the most amazing thing we’re growing is Eliza’s Thai purple yard long beans, just cos they’re…..so odd!  I finally got the right light and the right flower to take a good shot of  one of the flowers this morning. It’s so pretty and ornate that it reminds you of an orchid.

They’re slow to get started but they’re going good now, and I read that they do best in hot weather, which we now have.  July in Pennsylvania, yea.  Hmm, they probably think they’re in Thailand, lol.  Eliza picked the first one this morning and was putting it in her  sauteed lunch dish too. 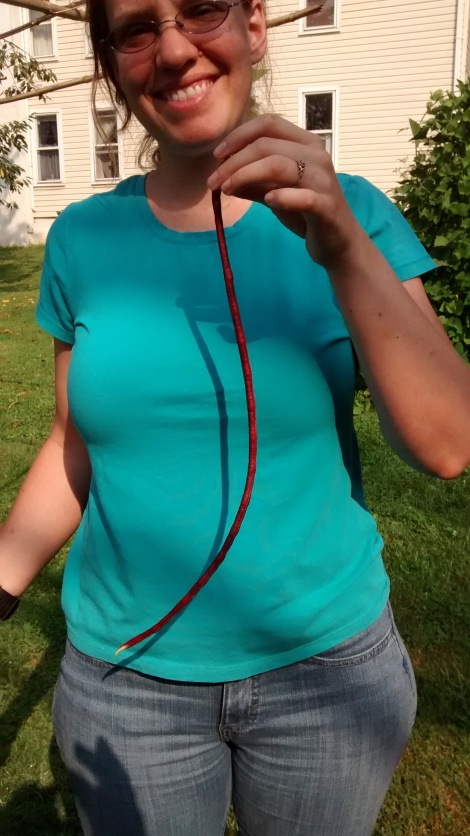 Summer, garden, fresh veggies, yea.  The ability to know how to let it all grow and have good land to do it, priceless. Blessed be.

21 responses to “Maybe I need a bigger pickin’ basket”