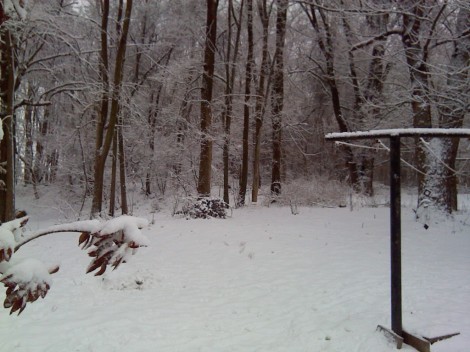 Grandma never complained.  She had a rough life, raising  a family during the depression. They were poor, had lots of kids, and my grandfather was a drunk.  Not a polite alcoholic; a nasty drunk. Grandma raised chickens for eggs and sold some for a little extra money, and grew a garden and did all the things people did to try to survive during the depression. The kids all had some clothes and some food but never enough of either, and never anything extra.

My dad never “complained” about the way he grew up, he would just discuss it. It was just the statement of facts; how he described it was how it was.  But he and my grandmother and some other family members had a common phrase they used: they sometimes talked about a thin little coat.  If it was really cold and you had a coat (sometimes people didn’t)  but the coat wasn’t warm enough, you were still glad to have any coat at all. But if somebody noticed that you only had a thin little coat, they were noticing that you weren’t ok, you were cold, you probably had no way of doing any better for yourself at that time.  My grandmother had an especially sad tone in her voice when she ever mentioned somebody having only a thin little coat.  She was remembering thin little coats and kids who were cold and hungry. And remembering that there was nothing she could do about it.

So the depression got over and my father and his siblings all survived and went on with their adult lives. Grandma died at 69, I guess just  from having a hard life. My dad provided well for us as I grew up; never rich by any stretch but most of all he made sure we were never cold or hungry. We lived in a nice house and had what we needed.

But one day when I was 12, there were some kids up the road who were obviously cold and hungry.  A road adjoined the road we lived on and up that other road was a hunting cabin which hadn’t been used for years.  Then some people moved into it, in the dead cold of winter.  They had 4 little kids.  One appeared in my room in school. His name was Paul, and kids picked on him cos he had funny clothes that didn’t fit right and sometimes only had an apple or a piece of bread for lunch.

Paul rode the same school bus that I did, and when we got off the bus, he walked up the road to the cabin they lived in.  Later I would see him walk down the road, toward the little town about a mile down the road.  I was old enough to realize it must be a long walk in the cold.  Later he would walk back, with a loaf of bread in a paper bag.  I noticed that Paul only had a thin little coat.

My dad ran his own business within 2 miles of our house.  One day he appeared at home as we were getting off the school bus, and I wondered why.  He told me to go on in the house, and then he talked to Paul, and Paul got in his car.  Later at supper I asked my dad where he had taken Paul.  He said he happened to see him there, and asked him if he would like a ride to the store.  My mother hadn’t known about this before, and she objected, saying those kids were dirty and probably had bugs and who knows what else. My mother spoke strongly, objecting. But my dad insisted it was ok, cos the boy was cold, and it wasn’t right for him to walk so far in the cold. My dad didn’t use quite those words.

A few days later I noticed that Paul had on a different coat; a bigger, warmer one.  And my dad kept appearing and taking him down to the store, then back to the hunting cabin, and then he would go back to work.

The kids disappeared after a couple of weeks. My dad said somebody had contacted relatives and those people came and got the kids and took them away. As I look back, I’ll never know whether it was my dad who got involved and found relatives, or what happened. Maybe the county was contacted and took the kids away, and going to relatives sounded kinder to explain about them to me.  I just know that one little boy no longer took the quarter he was given and walked 2 miles for one loaf of bread, in a thin little coat, living with several siblings in a big cold building with only some firewood to stave off the cold. And that my dad had obviously heard about these kids, and needed to help, and hadn’t just noticed him walking there.

Thinking of this almost 60 years later still brings tears to my eyes; understanding so much more about life now than I did then.  I’m writing it down on the eve of our holiday called Thanksgiving, a day when we are all supposed to pause to consider what we’re thankful for. I’m thankful for more things than I can mention at almost 70 years old.  But one of the biggest things I’m thankful for has always been the things my dad taught me about how to think about  and to treat other people. It’s important to me to be able to see if there’s suffering around me, and do something to help with it if I can, rather than looking away.  Now I’m an old hippie and a tree hugging liberal who cares about the things I’ve learned about people, and life, and about what’s really important.

Have a good Thanksgiving, count your blessings, and be well.

6 responses to “A thin little coat”