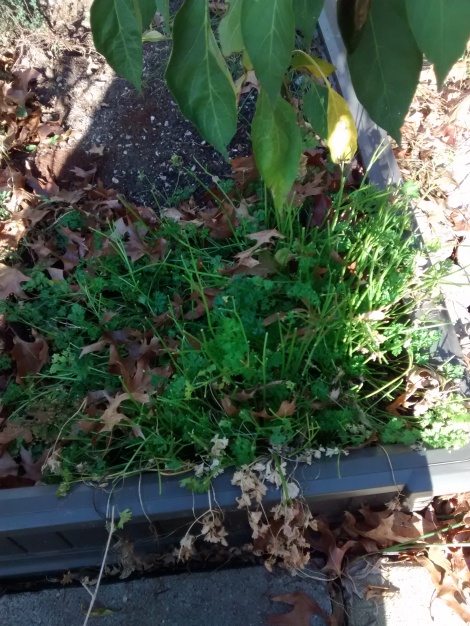 That’s parsley.  Well, it used to be parsley, and now it’s mostly parsley stems.  Some readers will remember a blog post about a big fat groundhog who was stealing tomatoes at the end of the season. https://sarasinart.net/2016/09/06/we-have-a-thief-in-the-garden/

Tomatoes are long since over, but Wilbur’s still a backyard resident.  In fact it looks to me like he dug his tunnel under the garage deeper than it was before.  OK, we all prepare for winter in our own ways Wilbur.

The other day I looked out the back door and saw something that was actually kinda cute, if I wasn’t interested in having parsley next year.  There in the corner of the raised herb bed, sat Wilbur, in the parsley, in the corner of the bed.  He was sitting up on his hind legs, holding a bunch of parsley up in his paws, the way a squirrel holds things to eat them, or maybe like a bride carries a bouquet of flowers.

It was a little cute, yea, till I went out and saw most of the parsley leaves gone.  Seems that groundhogs don’t like parsley stems, only the leaves.  Hmm, the same parts that people like.

Next year’s gardening season is going to be interesting,  yea.