There are sometimes new challenges come along, like groundhogs last year.  And old challenges like blight on tomatoes and powdery mildew on squash. I had both of them bad this year.  We had a long wet cold spring, to the point that I held seedlings in my little hoop house longer than I wanted to, afraid of late frost. When I was able to get things out then, they did good but everything has been later producing than other years.
Mid summer we started getting lots of rain, too much rain for too long and the tomatoes are now dying back due to all that dampness.  Blight is a fungus that’s in all the ground, and can get into the tomato plants from splashing water on the undersides of leaves. I’m careful to water from the bottoms without splashes, but you can’t control the rain.
Squash plants don’t like to be wet all the time and they get another disease from it: powdery mildew.  Both powdery mildew on squash and blight in tomatoes can be treated, and there are natural (non-chemical, not poison) treatments that do work well. But this year both those things became overwhelming after a while and now tomatoes and squash are declining.
Beans, oh I love growing beans. Once the Japanese beetles are done with their month long time in our area, there’s not much that happens to bean plants. I grow a kind of green beans that get long and taste great with no strings. And I grow Hopi Lima beans; tough,  productive plants that were grown for generations by Native Americans in the south west.
Hopis are pretty, and even after growing them for many years, I still look forward to finding different colored ones, like the dark purples. Here are some that dried for seed and some fresh, to eat now or blanch and freeze for winter.

A friend named Sam gave me the original seed beans for the Hopis, and she used to say she was always happy when she went to the garden and found her Hopi pods fat with beans. It’s funny how a person’s words can stick with you, but this phrase was a concept in addition to words.  Mine are now fat with beans, and  there will be Hopis to pick almost every day for about a month.
So things have been producing pretty well even while some were on a decline.  We’ve had lots of cucumbers, but they’re about done now. I’ve frozen a lot of tomatoes to use to make tomato sauce in a month or so. We’ve eaten a few summer squash that the mildewed plants were able to still produce.
And peppers, hot and  sweet.  I grow purple jalapeños for my DIL, cos she likes her hot peppers.  I grow a couple kinds of sweet peppers too, cos I like the sweet ones.  Not much happens to pepper plants if you keep them watered in dry spells. 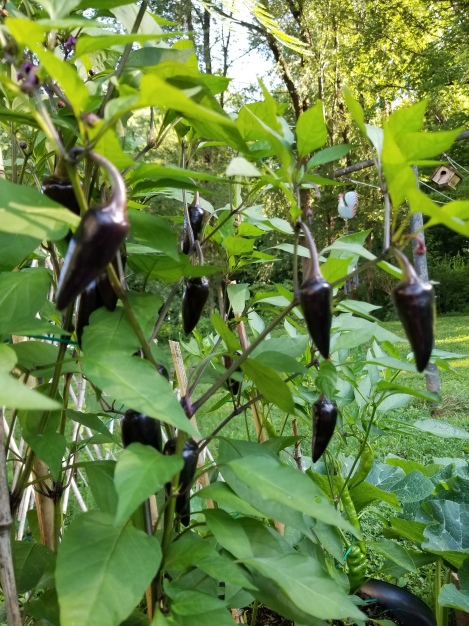 We’ve eaten eaten a lot of good garden veggies, even with the climate challenges. I’ve also had some stuff to share.  The joy of an old gardener who has learned her lessons well is to grow enough for you and yours, and still have some to share. These are the blessings of the earth.
And then there’s Audrey. I’ve been obsessed with this huge winter squash plant.   https://sarasinart.net/2018/07/18/a-squash-named-audrey/   She is now half way across the clothes lines and also going up into a mimosa tree. Sometimes she has tried to get into my pepper pots, and I had to move her branches and remind her to be respectful to her neighbors.
There are lots of male flowers on the plant now, and yesterday I saw that Audrey has a small squash. It’s like your dog having puppies……..I get excited about this plant. It comes from China, and needs 4 months to make ripe squash. My fingers are crossed that my weather won’t turn cold too quick. 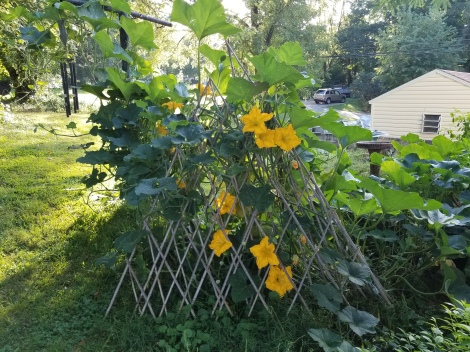 Squash plants send male flowers up first, large flowers on tall stems. The male flowers are the only ones  that have pollen.  These big attractive ones call the bees in, so they’re used to coming to the plant. Then  small squash appear, on shorter stalks, with a flower attached to them. What should happen next is the female flower opens and the bees go from the male flowers to the female ones, carrying pollen to cause the squash behind the female flower to develop.
So I don’t have a dog having puppies, but Audrey has a squash. Hopefully it will develop and  there will more, since the plant now knows it has enough growth/size to be able to support the production of its fruit.

Gardens are one of the best things in life: planting seeds and helping them to grow, watching, tending, and going out to pick food from them is the magic of the earth. I enjoy each garden, even with the challenges, cos who knows about next year.  I’m getting old(er), the climate is changing and who knows where we’re going with that. Everything can change so quickly.  I hope to grow my garden again next year and have good things to eat, preserve and share. And I hope to go there then and find my Hopis fat with beans. 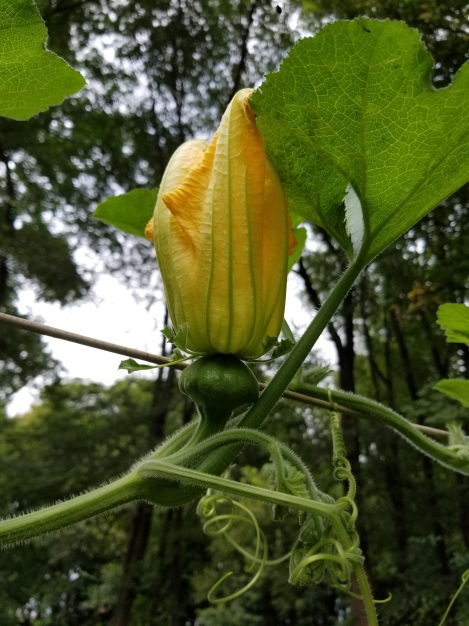 14 responses to “Gardening always has challenges”