I know animals do things that are amazing, like use tools and plan ahead.  But I never before saw anything like I saw today in person.
I had put out some hard little cracker things that I didn’t like, for the birds and squirrels to eat. A crow was on the clothes line  pole. They really aren’t very brave, for being big birds, and those crackers were close to the house. So he came down in 3 stages, finally on the patio where the crackers were.
He picked up one cracker very quickly and flew, up to the bird bath.  Then he dropped the cracker in the water, pulled it out and dropped it in again.  Then he sat there and broke it apart and ate it.  The cracker was too big and hard for him to eat, so he put it in the water to soften it. Then he did it all again with another cracker.
So I saw a bird make a decision that he wanted that food but he had to do something to it before he could eat it, and made use of the water as a tool to make it manageable. Nature never stops amazing me, to be able to see that happen.
Earlier I saw 2 starlings mating in the grass, and what an ungraceful  mess all that was.  It made me wonder how so many starling chicks get born, or maybe that’s the way starlings always…..get it done. I have surely seen more effective looking bird matings before.  There have been 2 rabbits around the yard, so there might be a bunny nest before long, and little ones running around.
Last May I had to have an old cherry tree taken down, diseased and at the end of its life span.  In its place I had an ornamental weeping cherry tree planted.  The guy from the tree company told me to keep it well watered all summer, and if conditions were right, it might even bloom this spring.  So, weeks ago there were little green shoots on every branch……it made it thru its first winter!  A week ago, the green shoots turned pink…..it’s going to bloom!  It is now called the happy little tree. 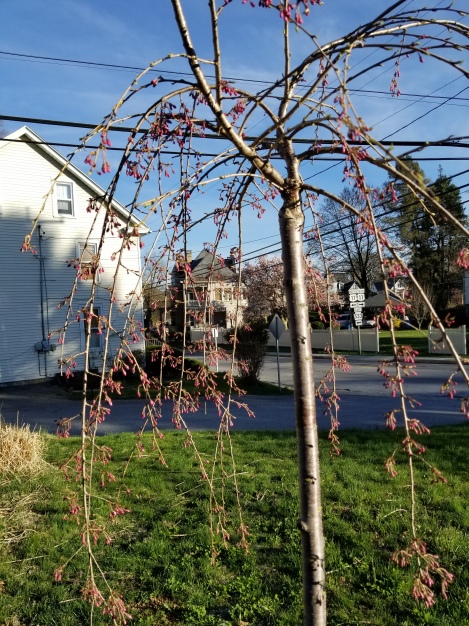 Spring and all that goes with it.  Spring things are starting to bloom, and I have stuff in the garden cleaned up and waiting…..till the day I can plant things.  I get all excited about spring and all the new beginnings.

18 responses to “Spring things and other good stuff”