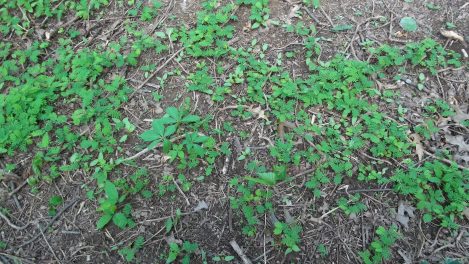 I see many of  nature’s miracles every time I go or look outside, but I could not believe this one!  At least 20 years ago, there was a mimosa tree  out front at the other side of my double house.  They don’t live too long in this zone, cos they really don’t belong here,  but it was a big tree with many flowers and lots of seeds.  Little volunteers used to come up all over that area out front. But the tree was starting to crack in the middle as they do here after a while, and had to be removed.

Mimosa is also called Persian silk, and gets flowers that look like paintbrushes, and are well loved by hummingbirds.  The leaves close up on each frond each night, and it’s a really pretty tree.  Below is a picture I took from Wikipedia, and there is much more information there about these trees.  http://en.wikipedia.org/wiki/Albizia_julibrissin

Fast forward about 20 years.  Along a long stretch of the side property line over there, the property next to me  had an ugly old hedge running along the property line.  I trimmed my side as best I could for years, while poison ivy and Virginia creeper and honeysuckle grew wild among the hedge plants.  It was thick and unruly and ugly.

I talked to the property manager over there and he agreed it was ugly and would just remove it.  So they did that, about a month ago.  The ground under the hedge that had stood there for so many years was rough and nasty looking, but he said they would mow over  it a couple times and then plant grass seed.  Good.  Eyesore and a problem gone.

So the other day I went around there to spray some poison ivy that was left from where the thick hedge was removed.  Unbelievable what I saw growing  in the ground.  The top picture is hundreds of little mimosa volunteers.  Those seeds were in/on/under the ground, under that scraggly hedge,  for over 20 years.  Now, the sun and some rain  have fallen on the seeds, and now they decided it was time to grow.

Sad that the guy next door will cut them off as he mows, but  I don’t want a hundred mimosa trees there and I’m sure he won’t even pay any attention.  But the miracle is that those seeds laid there that long, cos they knew their plant couldn’t survive if they sprouted.  Now they’re growing.  Unbelievable.  Nature is magic, and miraculous.

5 responses to “Another of nature’s miracles”