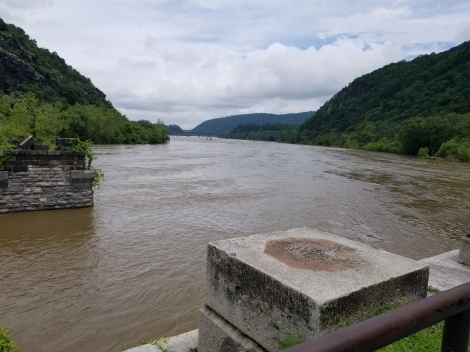 Once a year I  like to go to a place that seems back in time: steeped in history, relaxed, and where everything seems to move a little slower. Harpers Ferry, W Va, is a place different than anywhere else I know.  You can forget your issues and the issues of the world around you, and imagine……….just imagine….another time.    https://en.wikipedia.org/wiki/Harpers_Ferry,_West_Virginia

There was a big concern last weekend that there would be flooding in the lower part of town if the Potomac  river started to go above flood stage.  The Potomac River and the Shenandoah River meet in a gorge that has changed over the town’s history, since the gorge has constantly been carved by the rivers.  Normal river depth  there on the Potomac  is 9′.  A week or so ago we had just had 2 weeks of bad rain here, and also in most of the other areas that let water flow down to the Potomac.  The town was predicting the river might go to flood stage, which is 18′.  Or, it might have gone over that, maybe as much as 22′, and some major flooding in the lower part of town would then have happened.  Luckily, it went to 18′, just at flood stage, saving the lower part of town from damage to buildings, etc.

The town has had a bad  history in terms of floods.  One of the restored buildings in the lower part of town has a high water marker on the side, showing how bad floods have been during the years. The worst flood was in 1936, and that one did major damage to the town and changed the town forever. In the river there are remains of old bridges that were washed out by floods over the years, and one of them can be seen in the picture above.

This past weekend, the bike path on the other side of the Potomac washed out in a mud slide, and at one point they were no longer letting people walk across the pedestrian bridge to the Maryland side of the river.

Some trains had stopped running thru the town too, since fear of high water was getting unpredictable for a while as they watched the river rise.

(Harpers Ferry has a rich history of the importance of the railroads, and at one time was a bustling little industrial town.  The US Armory there  was positioned just right:  weapons could be made there, and shipped off on the railroad.  But the Armory stored many weapons in Harpers Ferry as well. That provided the source of the idea for John Brown’s raid in 1859,  a few years before the Civil War actually started. There is much information available on line about that raid and its aftermath, if you like to read our history.)

But the trains were running again when I visited there this week. Long freight trains, loaded with car carriers sometimes, and many shipping containers piled 2 high. They run thru town all day and all night, every couple hours.  There’s a railroad station there that has been used since around 1900. It is an Amtrak station for passengers to arrive, or to leave, with prior reservations.  There is also a commuter train which comes there 2x a day; people can park in the parking lot (with a parking pass) and ride the trains into DC to work.

The whole town of Harpers Ferry is part of the National Park Service, and they have restored the train station to what it would have looked like when it was used for more passenger traffic. 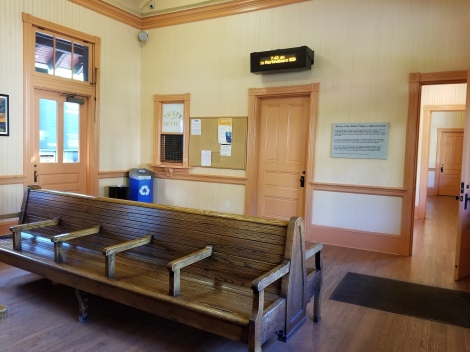 The trains make a lot of noise in town, since the tracks run right along the edge of the main part of town.  The tracks go over a bridge on the Potomac, and thru a cut in the mountain and on to the east.  The trains are required by law to blow their horns before entering the tunnel, and that’s noisy too, but it’s all part of life in the little town.

Here you can see the cut in the mountain where the tunnel for the trains was created and the bridge the trains go over.

It’s a good little town with friendly people, lots of good restaurants, and if you want to learn about Civil War history, its a good place to start. There’s a book store down on Shenandoah Street that has books covering every aspect of the war. There is even a ghost tour, for people who want to know if some of the past residents are….still around.

Here’s another blog I wrote about my trip there 2 years ago, with more details about a lot of the restorations and historical exhibits. You can tell I really like to go there.  https://sarasinart.net/2016/10/20/walking-in-history/

You should go to Harpers Ferry.  I’ll be back again next year.

7 responses to “Another trip back in time”